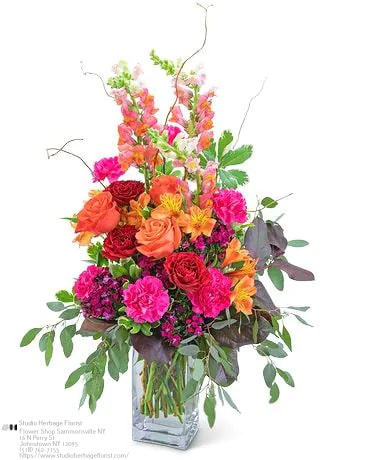 Studio Herbage Florist is a florist in Hagaman NY. Floral Tales. 5 Flowers in Famous Legends and Myths. Whether in tales of providence, tragedy, rebirth, and true love, flowers are an important part of storytelling around the world, throughout different eras. These extraordinary blooms enrich tales with their vigor and create striking images with their beauty. More than providing embellishments, though, the flowers in these stories have influenced many cultural traditions and ways of life. The stories handed down from generation to generation affect the meanings we associate with different flowers, which we then use for different occasions: to celebrate, to commemorate, and to comfort. The reason why they're so important is because the symbolisms of these flowers move, inspire, and teach us lessons in life. That's why today, we're going to tell you five interesting myths and legends all over the world which feature particular flowers with powerful meanings. Take a look at this list to see your favorite flowers in a totally different light! If you're interested in a formal course or would like to get certified as an expert on all things about flowers, we recommend looking into professional bodies and colleges in gardening and floristry such as the American Institute of Floral Designers of the AIFD (www.aifd.org), the American Floral Endowment (www.endowment.org), and other similar organizations offering programs specializing in floristry.

Call Studio Herbage Florist the flower delivery experts in Hagaman NY or surrounding areas today for your free estimate or if you have any questions, give us a call at (518) 762-7755

Find A Florist In Hagaman NY

These enchanting red blooms are said to have been borne of the heartbreaking love story of Adonis and Aphrodite. Now you may recognize Adonis as the pinnacle of manly beauty in mythology, often compared to swoon-worthy men - and you're right! In fact, he was so good-looking that he swept Aphrodite, the Goddess of Love herself, off her feet. She was so madly in love that she neglected her godly duties and even her own appearance. One day, he went hunting and stabbed a wild boar with his spear. Much to his surprise, the boar suddenly bolted after him and plowed him with its tusks. Aphrodite heard his wails and ran to be by his side, holding him as he bled to death. Mourning the loss of her mortal lover, the goddess scattered nectar on his blood, where deep red anemones later arose as a symbol of her grief. In other versions of this story, the flowers sprang from Aphrodite's tears mixed with Adonis' blood. Anemones continue to signify death, sorrow, and forsaken love to this day. But to put a more positive spin on this, these flowers remind us that life is fleeting, so we must cherish every moment with our loved ones. While the chrysanthemum features more prominently in Eastern mythology, specifically in Japanese culture, this bright and joyous flower or send flowers has a really memorable meaning in a notable German legend. On a deathly cold Christmas eve, a poor family gathered around their table to share a measly meal. Their peaceful night was disrupted by loud, repeated cries from outside their house. Curious, they opened the door to find a trembling pauper who was turning blue from the cruel winter. They brought him inside right away and wrapped him in blankets to warm him up. They offered what scarce food they had for him to eat and be satisfied. The man then took off the blankets to show his bright white clothes and a halo on his head. Lo and behold, he was the Christ Child in flesh. Upon revealing himself, he departed. The only thing that remained of him was two chrysanthemums where he had stood. Until today, Germans keep the practice of bringing chrysanthemums into their home every Christmas eve to honor Christ. While this is a rich cultural custom, the call to be charitable and compassionate even through hard times rings true for every person.

A lovely flower or quality flowers that flourishes in full bloom from murky waters, the lotus is considered a symbol of purity, rebirth, and inner strength from flower shops. This view is shared by many cultures, but its earliest date goes back to Ancient Egyptian mythology. The god Nefertum was thought to have been birthed from a lotus flower, or floral arrangement or sending flowers rising from the waters at the beginning of time. Known as the sun god, he remained heavily linked to the lotus in several Egyptian myths. In particular, he was associated with the blue lotus: its golden center was evocative of the sun's shining rays, while its vivid blue petals were likened to the vast skies. The similarities of the sun and the lotus possess a particularly significant and inspiring meaning. Much like the sun that rises and falls each day, the lotus opens its buds at daytime and closes them at night, embodying the cycle of life, of death and rebirth. In addition, Nefertum was also revered as the god of healing and beauty, further affirming his association with the wonders of life: not only with its beginnings and endings, but with sustaining and enriching it. There's a reason why the term "narcissist" is named after the mythological origin of this flower. Narcissist typically pertains to someone who is so egotistic and self-absorbed that they ignore the world around them, just like the hunter called Narcissus in Greek mythology. While loved by many for his handsome looks, Narcissus expressed great contempt for anyone who became smitten with him. One day, the mountain nymph Echo caught a glimpse of him, instantly fell in love, and followed him. But he soon caught on and demanded to meet her. Echo revealed herself, throwing her arms around him in delight. Narcissus viciously rejected her and broke away from her. The disgraced Echo hid in great shame for the remainder of her days, never to be seen again, with merely an echo of her voice left lingering. Nemesis, the goddess of revenge, decided to punish Narcissus for his callousness. Dooming him to love what he cannot have, she led him to a river where he fell in love with his own reflection. He knelt by the water looking at himself until he wilted away from thirst and hunger. A white flower with a yellow heart later grew where he died, warning us about the traps of treating others with malice and putting ourselves before everyone else.

Are you in the Hagaman, New York area and are looking for a business that does flower delivery near me? Are you interested in having fresh flowers delivered? If the answer is yes, you have found a great resource to take care of all your florist needs. We are the best florist in Hagaman, New York. No arrangement is too big or too small for us. We provide full-service floristry services.

Arguably the world's most famous flower, the rose has been a constant image in folklore and mythology across several cultures. But one universal symbolism they have is that of true, inspiring, everlasting love. This is never clearer than in the romantic tale of Cupid and Psyche. The youngest of three princesses, Psyche was a girl of astounding beauty, loved and admired by many people. Their ardor reached a point where they stopped worshipping Venus, the goddess of beauty. Overcome with jealousy, Venus enlisted the help of her son, Cupid, in her crusade for vengeance. But upon setting out for his task, he fell in love with Psyche. The smitten Cupid escaped with her to his private palace, but warned her never to look at him. However, Psyche's jealous sisters found her and deceived her into gazing at him. Enraged, Cupid deserted her. Mourning the loss of her lover, Psyche eventually became a servant for Venus. The goddess subjected her to many trials and torments, all of which she endured for the sake of love. Cupid then saved Psyche and pled to Jupiter, king of the gods, to marry her. Jupiter was greatly moved by their love and promptly expressed his approval. Their wedding was a grandiose celebration in the heavens, attended by all gods. Jupiter called for his daughters to shower the most gorgeous, glowing roses all over the earth to honor their union. At the heart of this beautiful story is the age-old but unquestionably true message: true love conquers all. It can endure all difficulties and hardships, because reaping the rewards of being with the people we love is more than enough to keep us going.

Hagaman (/ˈheɪɡəmən/), formerly Hagamans Mills, is a village in Montgomery County, New York, United States. The population was 1,292 at the 2010 census. It is named after Joseph Hagaman, the founding father. Hagaman, New York coordinates 42°58′39″N 74°9′2″W